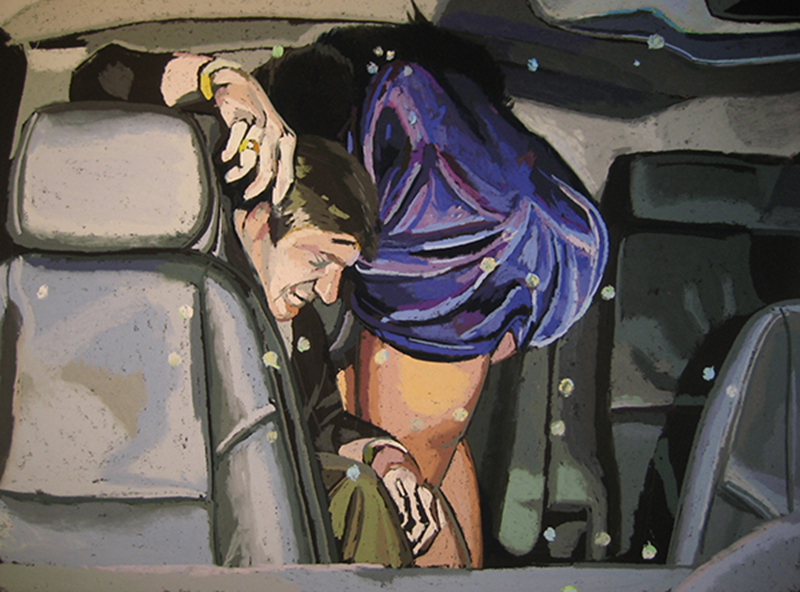 Stars in Cars By Walter Robinson

WALTER ROBINSON is editor of Artnet Magazine. This essay was originally published in the catalogue accompanying “Sarah Davis: You Want a Piece of Me” at Galerie SAKS in Geneva, Sept. 19-Oct. 24, 2008. “Girls and Cars,” an exhibition of new work, opens at Fred gallery in London, Mar. 5-Apr. 26, 2009.

he digital era has been tough on starlets. Technical advances have made celebrity surveillance much more thorough, as well as more predatory, at least when it comes to Paris, Lindsay and Britney, the three perpetual headliners. The paparazzi do chase after young bucks as well, not to mention breeding couples like Brad and Angelina — any Hollywood star will do, really — but the tragedy of foolish female youth seems irresistible. “The female is the victim of the species,” as Simone de Beauvoir so aptly put it in The Second Sex.

These fallen princesses, and the villains who purse them, are the subject of a new series of paintings and pastel works on paper by the New York artist Sarah Davis, who focuses on a specific subset of paparazzi images. Her subject is the starlet in her car, not the chic Triumph sports car that Marcello Mastroianni drives in La Dolce Vita (1960) — whose characters include a friendly blond photojournalist named Paparazzo, who is said to have provided the name for today’s horde of celebrity photographers — but the three-ton $80,000, Cadillac Escalade SUV and similar contemporary bulgemobiles.

But technology fails our wayward girls. Britney crashes her car, and her secrets, though wrapped in metal, are nevertheless sought out and discovered. A starlet’s SUV become a stage for her fall from grace, for her exhibitionism and her humiliation. In a violation of elementary-school propriety, she flashes her underwear, or in a more primordial transgression, reveals her vagina. Davis’ paintings are Courbet’s Origin of the World, or Manet’s Olympia, updated for a pornographic age.

The paparazzi are important to this contemporary morality play, and Davis includes them in her painted narratives. It’s all about social control. Like police, the paps pursue and investigate. They take a paramilitary approach to their prey, setting up checkpoints and coordinating teams of shooters. In Davis’ works, photographers are dramatic presences, appearing as stalkers or hunters, cameras at the ready, making overt a subtext of sadism and sexual aggression. This is blood sport. The drama of the paps and the starlets plays out on the run, like a Dionysian ritual, a sacrifice of the virgin.

The vulnerable nymph may be a lasting theme — Susannah and the Elders, Daphne and Apollo — but the princess kisses the frog, too (as Britney herself has shown, more or less literally, romancing at least one of her paparazzi pursuers). Evidence suggests that our starlets do enjoy themselves, which draws mockery and opprobrium. Like ordinary young people, they go out at night to party and show poor judgment. Less typically, perhaps, they get arrested, they go to rehab, they lose custody of their children. 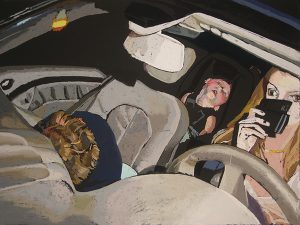 In Davis’ paintings, the celebrity is a kind of object. Cornered within her ergonomically upholstered interior, Britney is frozen by the camera flash in moments of disjunction. As if the bug-eyed designer sunglasses weren’t dehumanizing enough, she wears a rag on her head and wraps a scarf across her face like a bandit’s mask. Is she making herself ugly in a bid to escape? Faint hope.

Sometimes the celebrities dress down; at other times they dress up. In one work, Sienna Miller, decked out in haute couture, poses prettily and pretends indifference, sitting with hands clasped like a Buddha. In another strikingly alienated scene, Britney sits behind the wheel with a glassy stare, holding a wallet in front of her face, while her son sleeps, strapped into his car-seat cocoon, and a passenger — a court-appointed “minder” — bends over as if to retrieve something from the floor, with nothing visible but hair.

As the women in Davis’ paintings get into and out of their cars, or move from the front seat to the back to change clothes or hide from prying eyes, they disport themselves not like an odalisque in a harem but like a contortionist, who displays disjointedness and malformation instead of beautiful lines. Brazenly transformed versions of the classic nude, Davis’ women are mechanical figures rendered in a palette of passionate desire.

Her kaleidoscope of hues gives her figures a bizarre naturalness, as if to bring color to their cheeks and revive them from their media deaths. The intensity suggests, to borrow a phrase from the critic Donald Kuspit, “the use of fire to cremate the bodies of the dead,” a luminous spectrum surrounded by blackness.

Idle though the celebrity spectacle may be, it has considerable symbolic depth. A site for the collision of the real and the fictional, celebrity is a mass delusion, the joint creation of innumerable ordinary people longing for power, glory and unconditional love. Celebrity is a form of social glue, through which ordinary people can imagine themselves as stars. The effect is like Lotto, in which a single jackpot keeps millions of players in the game. And celebrity is magical concoction of voyeurism and exhibitionism, a crossroads of looking and showing — and a potent model of an elemental dialectic of artistic practice.